Over the last several days, I've been thinking about all the different ways in which I've tried to lose weight.  I've tried all the popular diet plans - some with great success for a very long period of time.  It's been the last 10 years or so that it's all gotten away from me.

The last thing I tried before deciding knowing and understanding that there really is no quick fix was Garcinia Cambogia.  I took it in the mornings and would get a headache within an hour of taking it.  On the days I didn't take it, I didn't get a headache.  I tried different scenarios, but the result was always the same - a headache.  To top it all off - I didn't lose an ounce of weight!

Now I know objectively and intellectually that it wouldn't work, but emotionally I was hoping.  It's the same thing with some of the other "diets" I've tried.  The thing about it is that I always looked at "it" as "THE" thing that was going to fix my problem.  I didn't understand then, and I'm only starting to *really* understand now that there is no quick fix, but just ongoing effort - digilent, always mindful effort - for the rest of my life.

In those moments when I realize that this will be forever, I get panicky  It happened today and it was terrible.  I'm brushing my teeth and looking at my face and I had the thought that my skin was looking better.  The VERY NEXT THOUGHT was negative - 'you'll never be able to do it'.  Hubby came in to the bathroom at that moment and saw that I was upset.  He was sweet and when I told him what I was thinking, he said, "You ARE doing it."  He's not of man of a lot of words and his ability to cut out all emotion and get to the grit was just right.

I guess the thing about it is that I have a lot of weight to lose and you always hear about long-term success and how it's very difficult.  However, I've read quite a few blogs of those who have had long term success, so I know it's possible.  The getting from here to there is the tough part.  There are so many habits that I need to learn, un-learn, and re-learn.

We made our weekly Costco run today - yesterday turned out to be a totally lazy day.  Before we left, hubby asked if I was going to get something to eat before we left.  It's the first time he's done that before.  So I took a few minutes, made a smoothie, and drank it on the way there.

As we were checking out, hubby said he didn't want to eat lunch there - okay, no big deal.  He decided that he wanted to go to a restaurant where a chef acquaintance of our had just taken over.  So that's where we went.  The chef came to our table - he's a young fellow and I always tell him he should be on Top Chef - and it was great catching up with him.  I took the opportunity to ask him about the menu, so I knew what was what.

When I finally went to order, I ordered my chicken with no rice.  The server was a bit of a butt about it, but I told him emphatically that I didn't want rice on my plate and that he could put broccoli on it instead.  Then I ordered the other side veggie of squash/zucchini.  This is what my lunch looked like: 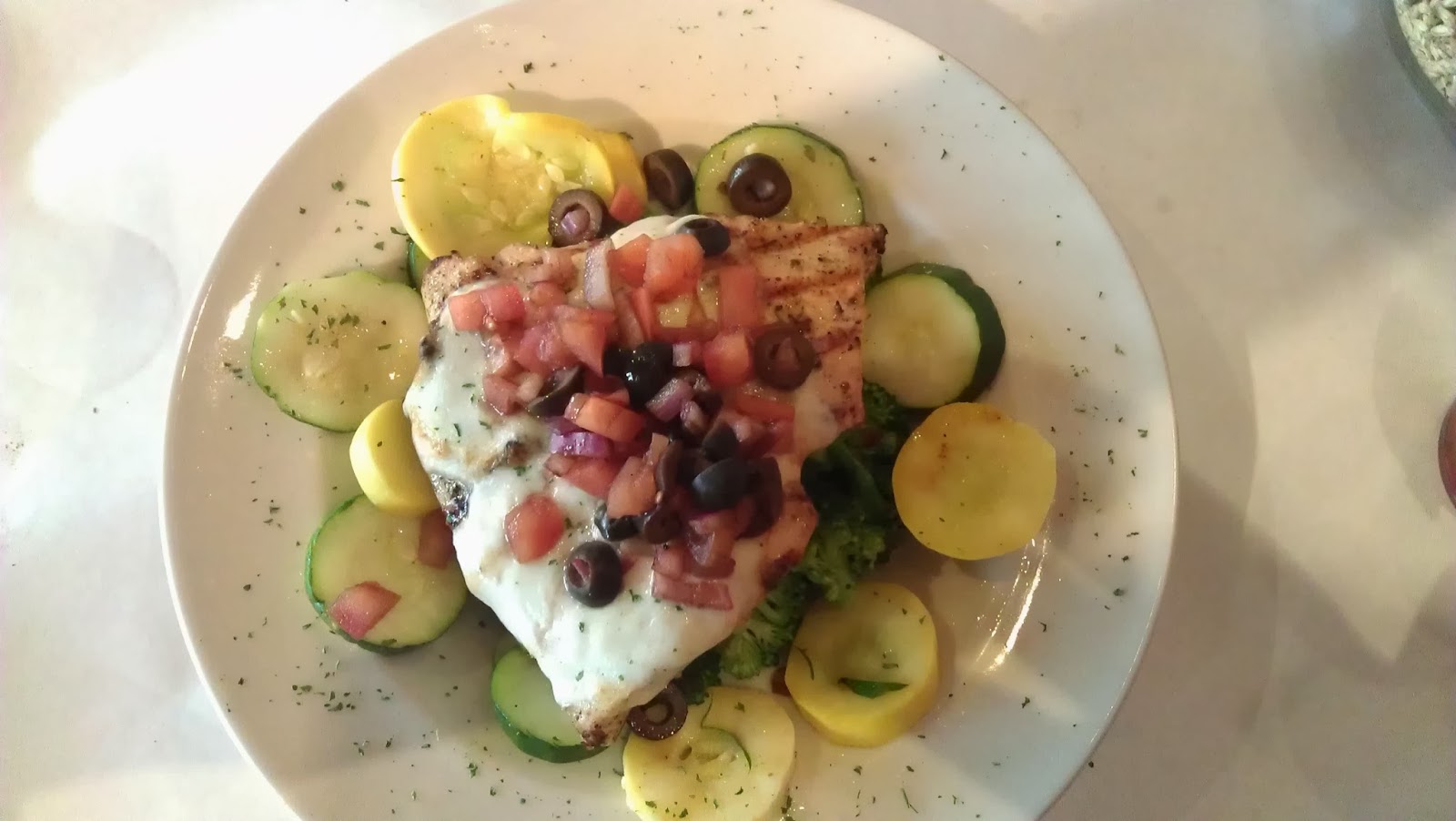 It was really good and filling.  That's a chicken breast with mozzarella and a salsa on top surrounded by squash and zucchini.  Underneath the breast was about a cup of broccoli.  After I had eaten about half of the dish, I realized I was full - SO I STOPPED EATING.  I was pleased with myself that I stopped when I was full.  Hell, I'm glad I realized I WAS full.  Somehow I think I have (had?) this idea in my head that if it's healthy, it's okay to go ahead and eat it all regardless of my satiety.  Silly me.

Dinner tonight was left over meatloaf (about 3 oz) and a very small chicken breast (about 3.5 oz) along with some leftover beans and fresh spinach.  Note to self:  Spinach and coconut oil are not a good match.

I think I can live with that.

None of this makes sense, but that feeling this morning really left me a little unsettled - they're out of nowhere.

A few other little accomplishments today was that I got the pantry cleaned out.  I got rid of everything that we were not going to eat (since the kids are gone) and everything that had expired.  I was quite satisfied.  I need to do that with every closet in the house and the basement!

Oh - the Seahawks did an excellent job at the Super Bowl.  I kinda feel bad for the Broncos - it was a whooping!