...thinking about Jimmy Buffet's song, Come Monday.   I've always liked that song.  I guess it's appropriate being that it's Monday.  But more importantly, it has nothing to do with the topic of this blog post, which in itself only has a loosely defined topic to begin with!

Hubby's back and getting rested - still waiting for his luggage.  We slept in a little late this morning, but I made lunches before heading off to work.  Tuna salad.  I used to say 'tuna fish salad' and then realized that it was redundant since tuna is a fish.  Random thought there.

The scale was down some today, but nowhere near where it was just two days ago!!  Blast me!!!  *shaking fist at myself*.

I'd read that when some folks eat higher carbs than they're used to, they kinda go off the deep end with binging.  I don't feel like doing that at all - actually, it's pretty much like any other day.  I'm thinking this is a good thing.  On the other end, the 20/20 hindsight, of Saturday's "excursion", all I have is more resolve to continue forward and perhaps a better understanding of what my food boundaries are.  Don't get me wrong, they're not restrictive boundaries at all, but for right now, they're "limited" boundaries.  Like I said yesterday, I'm just not willing to have to re-lose 4-5 pounds, even if it is water-weight, over a meal.

I was telling hubby all these thoughts today.  We're always making stupid teenage comments to each other, but today was just funny.  Today I was asking him if he ever thought that he'd have a wife that was close to 300 lbs.  He said, 'no'.  I asked, "Did you still love me when I was that big?"  He said, "Yes."  THEN, I asked, "Do you love me more now that I'm losing weight?"

DO YOU KNOW WHAT HE SAID???

He said, "I have more love per square inch now that there's less of you."  He continued on to say that his "love density" was higher.  He is so crazy.  It's his way of saying he loves me the same.  It must be the engineer in him that takes the long way around.  Sort of a Rube Goldberg with words.

Dinner tonight was a new experience.  Here's a picture: 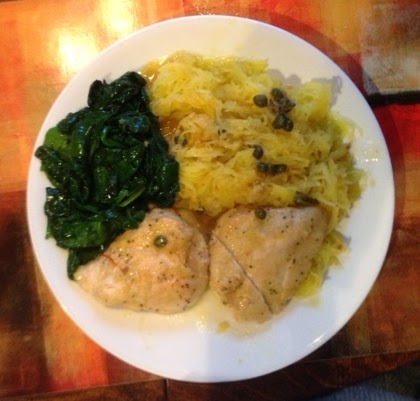 Lime chicken with capers (we didn't have lemon), sauteed spinach, and spaghetti squash.  If you look at the piece of chicken on the right, you'll see it has a cut through it.  Hubster cooked dinner and directly after he saw me cut the chicken, he said, "Aren't you going to take a picture?"  He even took the picture!  I think he wanted me to post a picture of the dinner he prepared!

Anyway, we'd never had spaghetti squash before and it was AWESOME!  I loved it!  It will be a regular item from now on.  My new favorite vegetable until the next new one comes along!  We are really getting in the grove of having a variety of vegetables at dinner and experimenting with some that we've not had before.  I still don't think hubster is willing to give brussels sprouts a fair chance.

In reading some of the blogs I follow today, I came across Jane's blog at Keeping the Pounds Off.  She wrote an awesome post entitled, Practice doesn't make Perfect, It Makes Better.  It's excellent food for thought.

Posted by LuckyMama at 9:50 PM