...thinking all sorts of random thoughts.

So...when I got up this morning, I went into the bathroom, said good morning to the scale, asked him how he was doing, if he'd had a good night, even if I could get him a cup of coffee?  Did my ass-kissing have any sway on the scale?????

I showed the scale this picture and told him that tomorrow better be a better day if he knows what's good for him! 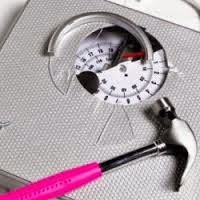 Anyway, what choice do I have but to be patient???

On another topic, the day's eating was a bit interesting for me.  Both hubster and I had to get our new driver's license today.  He HAD to get his, but mine isn't due for another few months, but it's such a PITA to go to the MVA that I figured I go with him and get it a few months early.

This meant that we got to sleep in a little late, which meant that we ate breakfast a little later.  Plus, instead of my usual smoothie, I had a repeat of last night's dinner - a cheese omelet along with a kiolbassa.  I was really satisfied afterward and had a feeling that it might last a good while.

After getting our licenses (boy do I have a lot of white hair - where did it come from????), we decided to get the emissions testing on the car since it was close by.  Then off to work we went.

We thought that we might go ahead and get lunch, but it was still a bit early for lunch and neither of us was hungry at all.  We decided that we'd go ahead to work and just take a late lunch.  Well, I had forgotten a meeting, so the late lunch ended up being an early dinner.  We went to the same restaurant we've been going to where I again got the salmon and asparagus.  Gotta say though, I sent the salmon back because they killed it twice.

On a side note, what the hell is it with the brownies lately???  The meeting I'd forgotten about was a relatively large gathering.  When I walked in, there were crackers, cheese, and...BROWNIES!!!  With LOTS of walnuts on them no less!  I went to the OTHER side of the room to minimize temptation.  So what happens?!?!?  A colleague sees me, grabs a brownie, and makes his way AROUND the room to come sit by me.  WTF?!?!?!?!  Really????  I would have liked a brownie, but then I saw that last huge spike on my weight graph in my mind.  After that, I just saw a bowl of sugar instead.

Now back to our regularly scheduled programming.  Later, when thinking about how I ate today meal-wise, I was really satisfied with just these two meals.  I wasn't hungry until we were at the restaurant, so the timing was right.  I dunno - I just LIKED IT.

I'd like to figure out how to do this on a regular basis, but it may be difficult.  I usually have a protein smoothie in the morning, which does a great job of lasting me until 12:30-1 or so.  Breakfast this morning was quite robust - about 730 calories - but it took a bit longer to prepare.  I wouldn't mind foregoing the smoothie and eating later, but then I'd be eating at work.  That's okay, but I'm pretty busy at work.  Anyway - I gotta figure out some satisfying food options that would allow me to do this.  The whole switchup in the day's eating reminded me of Yum Yucky and her intermittent fasting.  She's had good results - but she's kinda like that doncha know.

The biggest thing about the day was on the way home.  It was really a cool feeling/realization.

I was driving and as we sat at a traffic light, I could feel that my tummy was full - not gorged, not uncomfortable, not stuffed - just full and satisfied.  The next thought was that my pants felt fine - they weren't uncomfortable, they weren't tight in the waist, and my belly wasn't hanging over the side.  I didn't feel the need to unfasten my pants or feel like I just wanted to go to sleep.  As a matter of fact, my pants felt the same way they'd felt all day.   This really is a brand new realization - it's kinda cool.

At times in the past, I've eaten WAY past the stage of being full.  I can remember thinking that I didn't really have pants to go out with because they would be too tight after I ate.  I've taken going out to eat to mean that I had to taste as much of the food to get my money's worth.  This usually meant ordering appetizers (sometimes more than one), entrees, and dessert.

In the past, eating out has been a big challenge for me.  I've changed my focus (and I hope permanently) to good food that is going to nourish me and keep me on track with my goal.  I think kicking the sugar has had a big impact on that because I generally don't feel so crazed about food.  That feeling of desperation, while still rearing its ugly head sometimes, is on the wan and maneuvering these things is easier.  Making good decisions, while sometimes hard to make, are becoming easier and a bit more of the norm.

These are very good things.