Wow - it has been non-stop BUSY for the last few days.

So - went shopping on Saturday with a girlfriend of mine.  It was the first time we've clothes-shopped together, so I was wondering how it would turn out.  Turns out she's an EXCELLENT shopping partner.  She caught on to what I like, was pretty open about the weird shit I picked out, gave me an honest critique, and told me I was batshit crazy when needed!  We really did have a good time - it should have been - we shopped for 7 hours!  Holy moly!

The big event of the day was that everything I bought was from a department store.  PLUS, there wasn't a struggle finding something that fit.  Rather, I was able to choose most things I liked.  Funny thing though, I bought sizes from a 16 to a 3x!  Go figger!  I got three linen shirts, two pairs of linen capris - and one pair was white (do you hear that Mama???  white pants)  It's the first time in my life I've ever owned white pants.  I think I ended up with something like 15 pieces of clothing - all at least 60% off!  Oh - I also bought a shirt that didn't fit, but I really liked it and it will fit!

It was a win, win, win day!   I had fun with my friend, got clothes that I liked, and got them on the cheap!

Yesterday, I had to clean the house, get ready, pack, and drive up to Gettysburg for this class I'm taking.  And then, I realized I had a whole damn book to read by this morning.  I'm so glad it was a fast, easy read.

By the way - I brought my scale with me!

I think I said before that I had asked for food accommodations for the class.  I've got to say, I couldn't be happier.  They really did an excellent job.

The buffet breakfast was all sorts of sweet breads, cereals - all empty carb type foods - along with coffee, milk, and cereal.  This was my breakfast and it was hot and fresh: 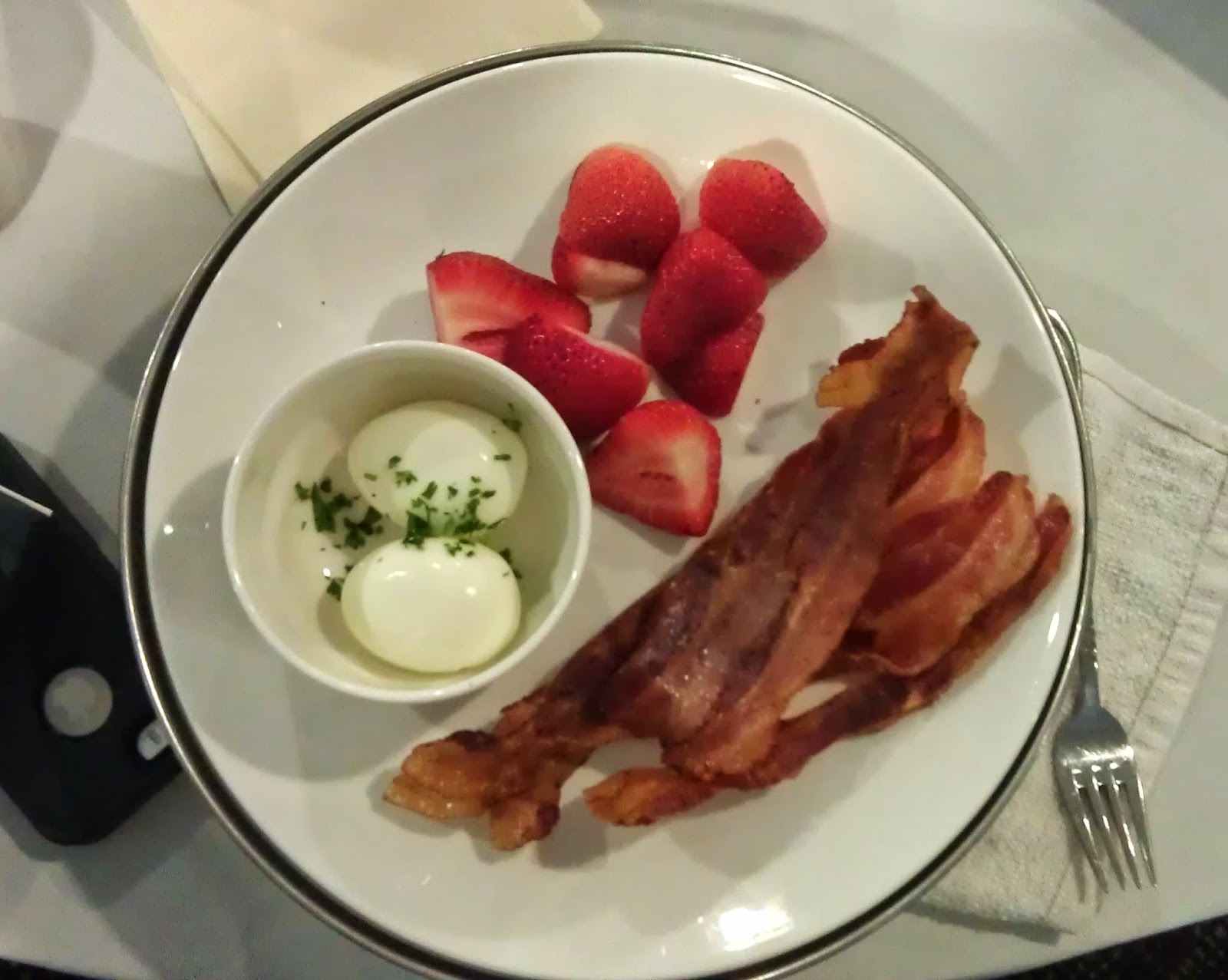 Bacon and eggs with a few strawberries - I was a happy camper.

Then at lunch, they had a burrito buffet.  It was all processed and heavy on the carbs.  They delivered this wonderful salad to me and again - I was a happy camper. 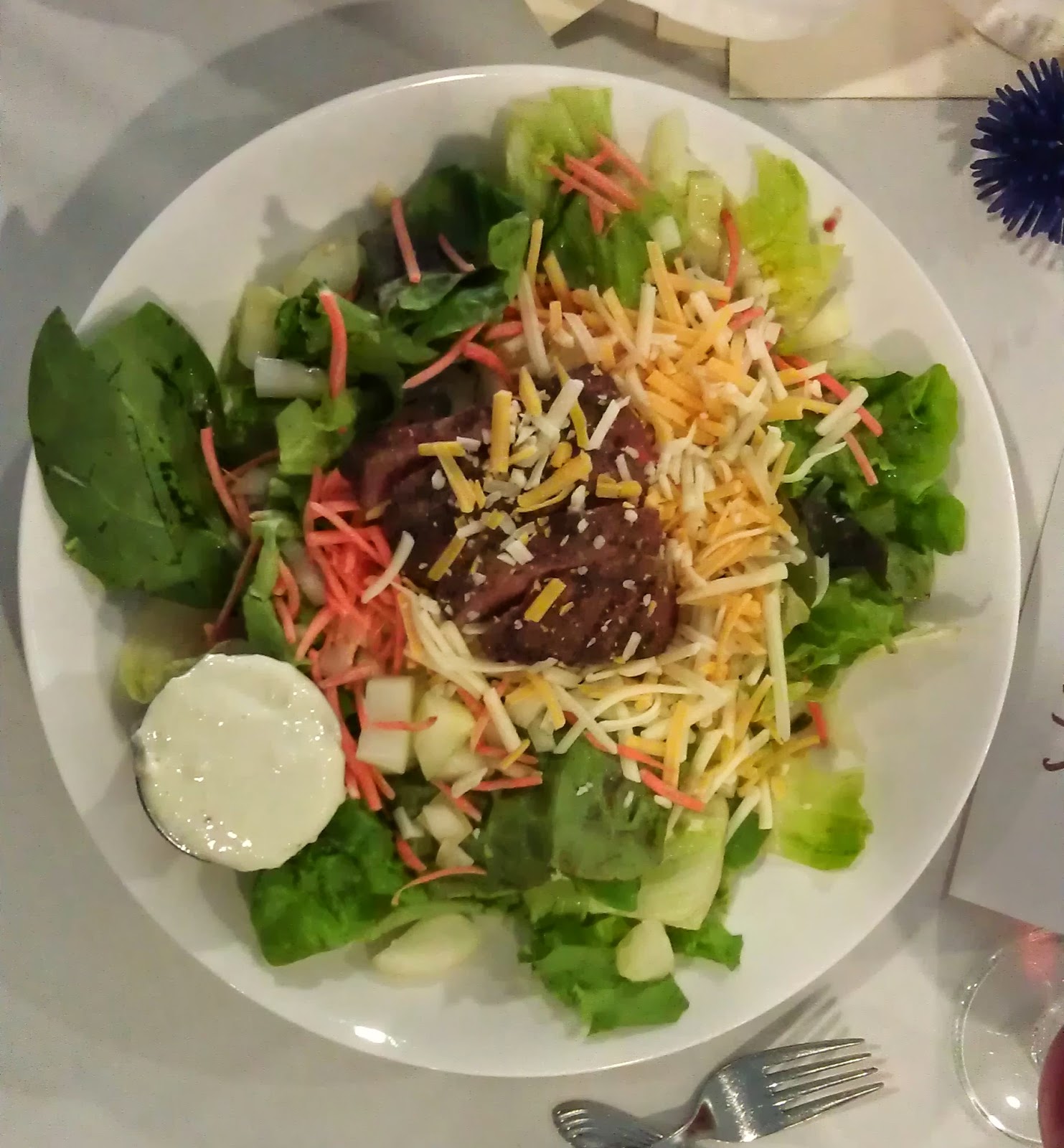 There was an afternoon snack of pretzels and chips, but I declined and just had yet ANOTHER cup of coffee.  I hope the rest of the meals are as good.

Dinner was another story.  My table of classmates were all going out, but I declined.  I'm tired and didn't really want to compromise my eating this evening.  So, I ate in the hotel restaurant with one of the classmates with whom I work.  It was a very limited, but expensive, menu.  The waiter was one of those young folks who thought that because he was cute, he could give shit service and it would still be okay.  Well, he thought that until this evening.

I ordered an entree piece of salmon with all the sides on the side and a large salad.  When my meal arrived, it was a piece of salmon (the size of 3 fingers) on top of the salad - no sides.  The waiter dropped the food off and left.  I was irritated.  Anyway, it was fixed in the end.  When the manager came by the table and asked about the meal, I told him of my irritation and it was fixed...45 minutes later!  I will not be eating in the restaurant again.

The class is going quite well.  Part of the class is a 360 assessment of my leadership capabilities.  The assessment was done by my management, my peers, my direct reports, and other folks I work with.  Altogether, I had 26 people assess me.  Surprisingly, they think I'm a good manager and don't have any fatal flaws.  The worst fault was that I'm sometimes too direct.  I'm pleased with the results and can now concentrate on more forward-thinking planning.

Onward!
Posted by LuckyMama at 9:32 PM