In Vienna with hubster.

As usual,  it was a comedy of errors.  The biggest being that I left my walking shoes at home.

The total flight time was 9 hours; the first plane was packed to the brim;  the second plane was a bit better.   I was able to get about 3 hours of nap time.  Other than that, we've been up going on 32 hours, but it's fun so far.

Food is going to be a problem.

On the plane, the airline served a choice of either pasta or chicken curry.   I chose the curry... about 2 ounces of chicken with baked on sauce with rice and some sort of bread dressing.   The sides were a half cup of salad,  a roll,  and lemon cake.   Ate the chicken and a little of the rice.The plane's breakfast was quite European - a croissant.   Hubster leaned over and said that we would get something as soon as we landed.   I didn't know what Heathrow would have at 6 am, but I was hopeful.  Turns out I had one of the best salads and berries in my life.  I don't know if it's because I was hungry since I hadn't really eaten for 11 waking hours or if it was a really good salad.  It had all the good fixin's...meaning ones that I can eat without having an issue...and was quite filling.

On the plane ride into Vienna, a similar thing happened - a very high carb meal.  I just gave it to hubster.  I think I'm gonna have to start watching him because he's eating his meal AND the food I don't eat - not a good thing.

After we arrived in Vienna, we checked into the hotel, got a metro pass for the week and started going around town.  We were both exhausted, but we'd rather be awake and doing stuff during the day, so we just stayed up and toured a bit.  Tomorrow is the start of the real sightseeing and the diving into Vienna.

I did get to see a Gustav Klimt exhibition today - I do love his work - there's just something about it that just fascinates me - almost like Richard Dadd, who isn't so well known.  Anyway, I'm spouting names like I know something and I don't - I just love Klimt's work!  That is all.

Here's some random pics of the day. 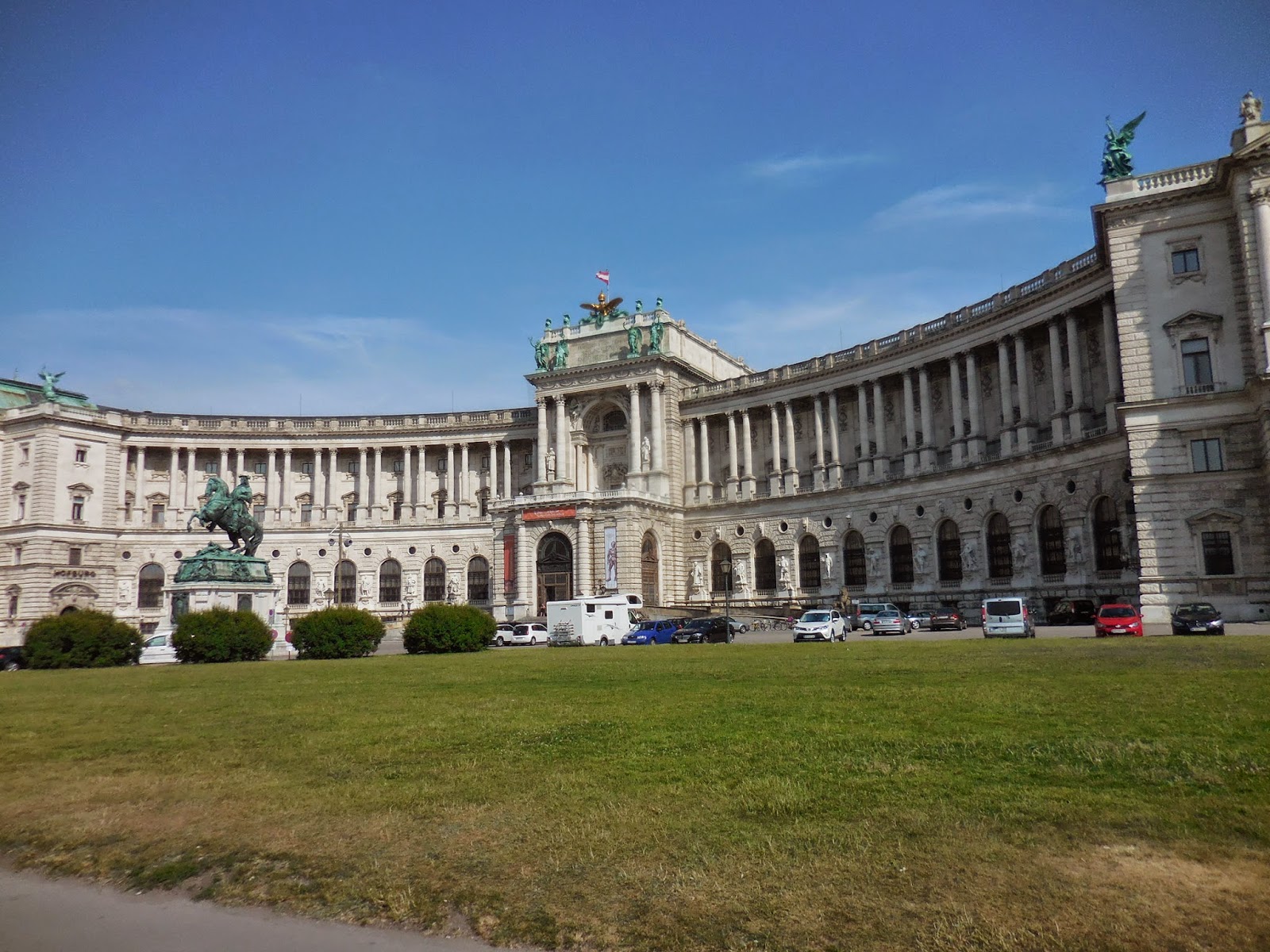 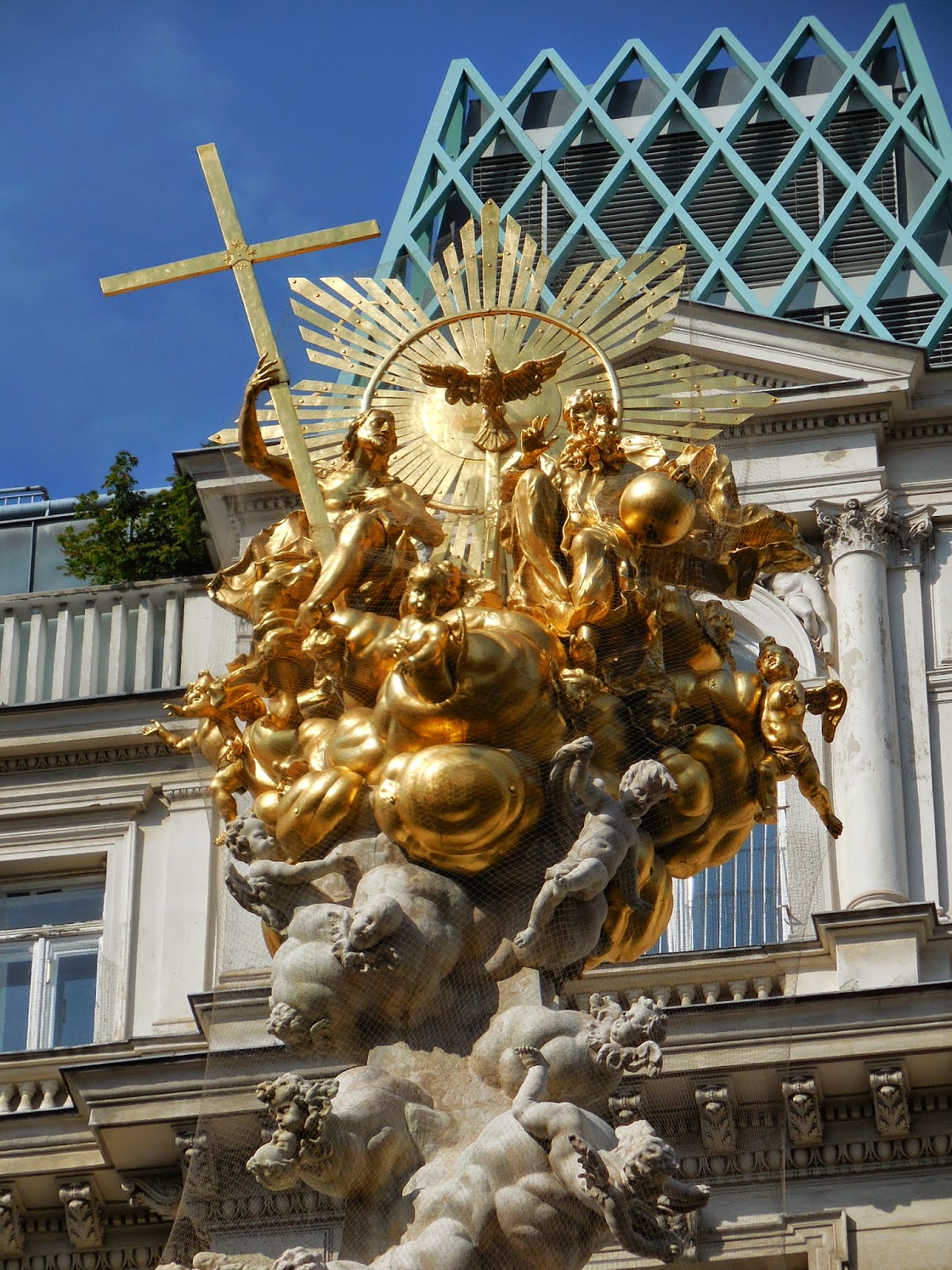 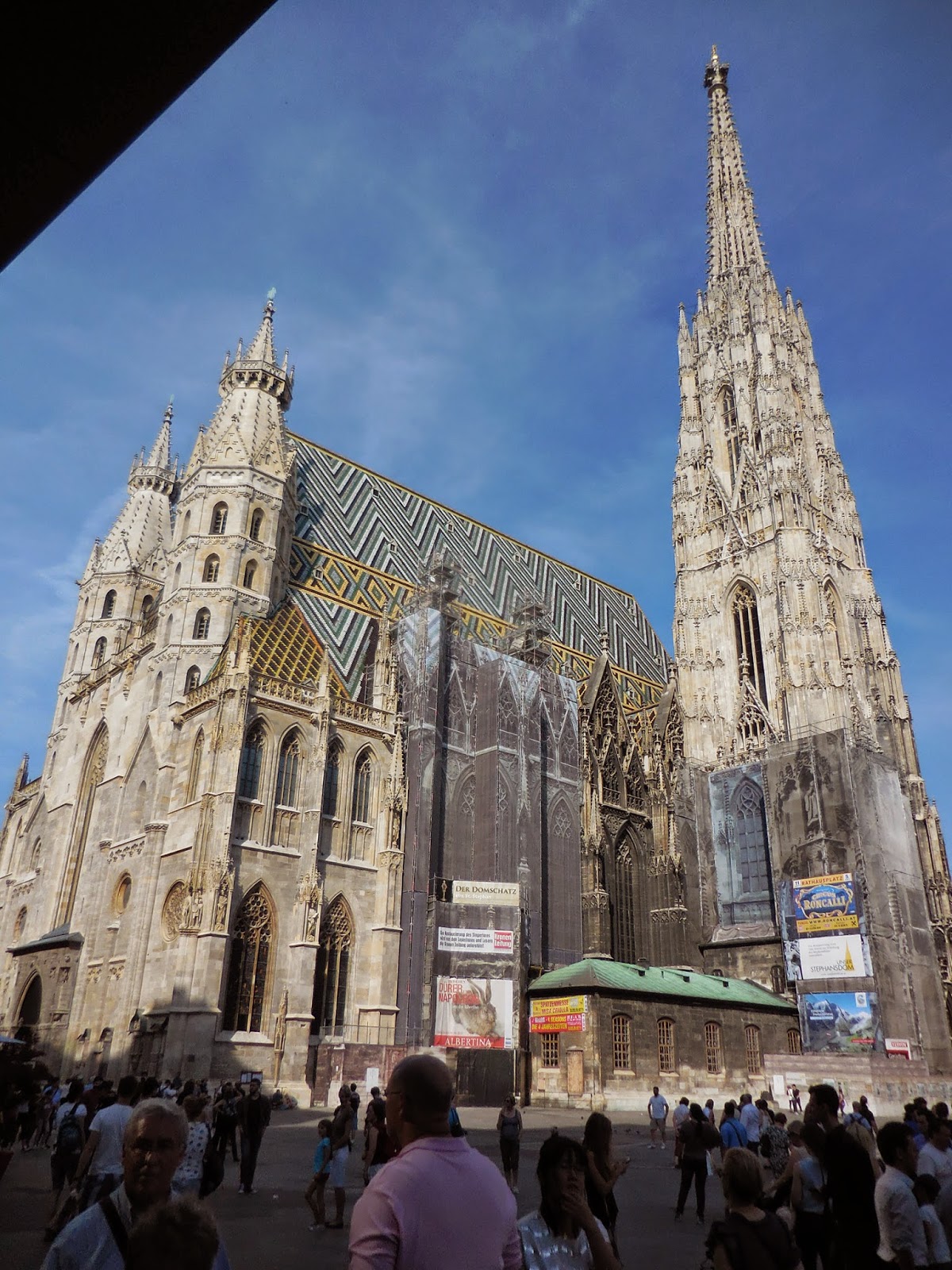 If I weren't so tired, I would remember where all these places were.  The first large castle is part of a big museum and not too far from Parliament.  I'll be going back to check out the museum.  The second picture is the top of a very tall statue.  It was really interesting because it's clear the status has been there a long time and businesses grew up around it.  Anyway, there was a young woman sitting at the base of the statue singing opera, the sun hit the gold at just the right angle (which I didn't catch), and it just struck me as pretty awesome, hence the pic.  The third pic is of a cathedral.  Ever since Pillars of the Earth by Ken Follett, I've had a thing for flying buttresses even though this particularly cathedral doesn't appear to have any that I can see.  The little green, one-storied house is the original church (I think).  Oh - that fellow in the pink shirt front and center is hubster.

It was getting late so we headed back to the hotel to decide on dinner.  Turns out that where we wanted to eat was near the cathedral and the Klimt exhibition.  We were too tired to go back, so we just ate in the hotel restaurant.  Man - don't eat in the hotel restaurants.  Let's just say they are QUITE proud of their food.  Plus the dollar don't mean much around here, so the dinner was quite expensive I thought.

But it was good and I had my first schnitzel ever.  It's basically veal that has been pounded very thinly and then fried in several different oils. 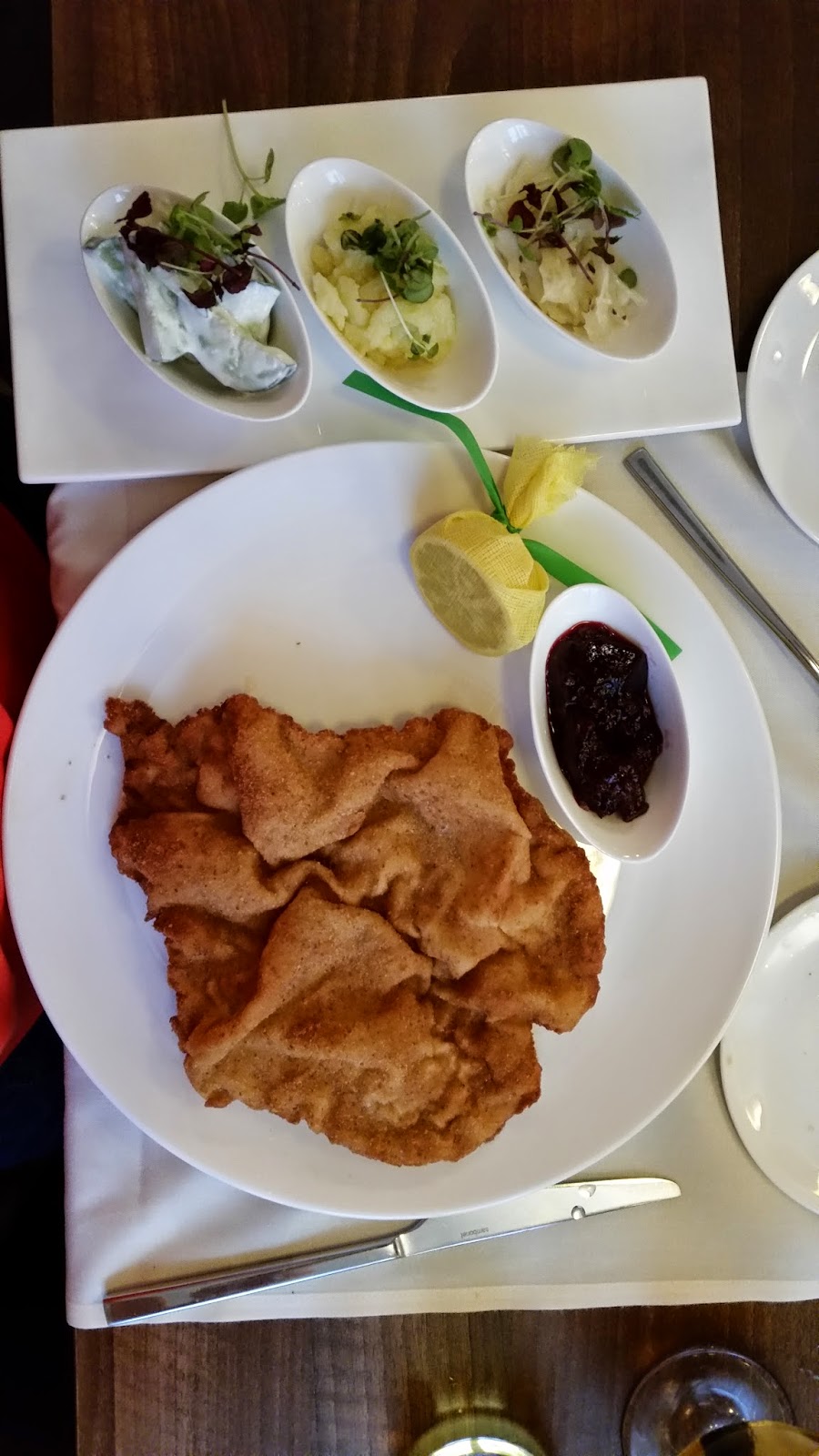 Before we got here, hubster said it was a real meat and potatoes area.  That's true.  But it's also a real bread and gelato and yummy-bad-for-me-food area too.  While we were walking around today, I looked at all the foods - hubster was very good at being the even keel - because I was tired and ready to just try a little of this, a little of that.  Sound familar?  Recipe for disaster.

So, we talked about it a little.  I'm going to try the local cuisine - the schnitzel and the pig knuckles.  I'm also going to try an original sachertorte and one other that a friend said that I just had to try- it's something with fresh fruit.  I'm trying to plan.  The whole being on vacation thing and letting your guard down can't happen. I gotta keep my shit together!

Two final things.  One - our room does indeed have a scale.  It said 257 this morning - I'm totally good with that - my ankles were holding 5 lbs of water even with compression hose.  Two - perhaps I'm missing it, but there don't seem to be a lot of places to get something to drink.  There are water fountains, but it seems the opportunity to drink to my fill is missing.  Oh yeah - we got a 3/4 little of REGULAR water at dinner - it was 10 bucks!

I hope I can post in the next day or two.

Posted by LuckyMama at 3:56 PM