Just 0.6 lbs more and I'll officially be below 250 and in the 240s.  My body has its own sentient awareness that I would really like to see this happen tomorrow morning.

Soooo...we know it's not gonna happen - at least not tomorrow morning!  I think it's nature's way of teaching me patience - something I've never had a whole lot of...ever.

But it is what it is and it'll happen when it happens.  At the moment, I've got my shit together and my ducks are in a row, so there's not a whole lot I can do about it.

Along with the soon-to-be, upcoming scale victory, there are a couple of other side effects of losing weight that I've noticed.  Most folks call these non-scale victories, but for some reason, I hate the term, so I'm gonna refrain from using it.  I'm gonna call it the CSILBILW instead - cool shit I like because I'm losing weight.

The thing I notice most often - and it's just a little thing, but I really like it is that my wedding rings are looser than they've just about ever been.  They separate and move apart from each other, but not enough for them to go over my knuckle.  There've been times that it seemed like they were smashed together because they were surrounded by sausage fingers. 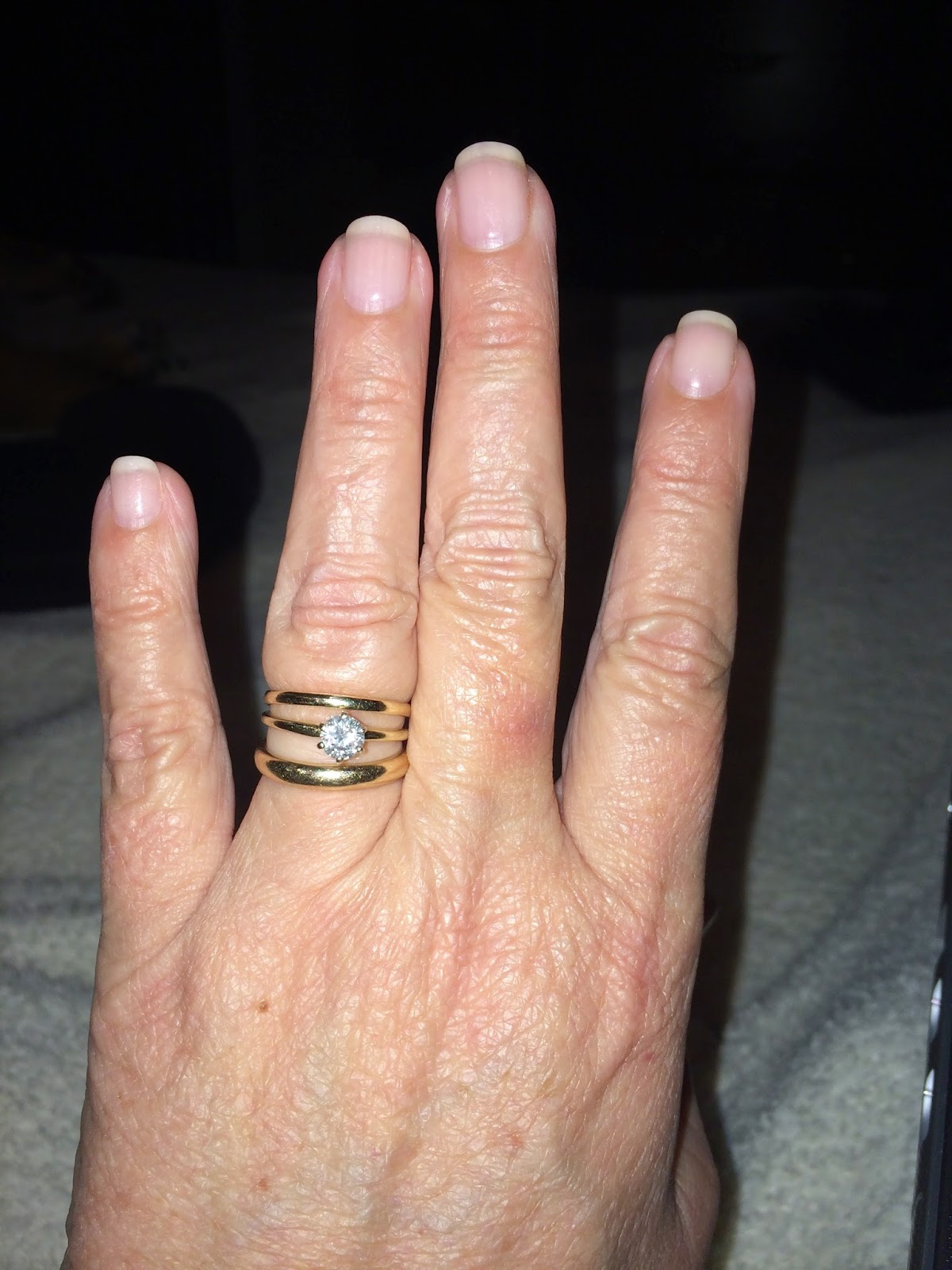 Like I said, it's not a huge thing, but it is a constant reminder.  BTW - the little band on top is the band from the renewal ceremony last month.  I always say I'm gonna get an insanely big, bazillion carat ring, but I don't think I ever will - I tend to keep things quite simple jewelry-wise.  And yes, that is a bruise on my middle finger.

I also noticed today that my knees aren't hurting when I'm walking up the stairs - that's a big deal.

My jeans, even when freshly washed, aren't tight at all.  Even though I can wear the next small size, I'm not quite there - soon.

And the biggest thing really - and it dawned on me tonight was food.  I worked a little late tonight, it's Tuesday, and I didn't feel like cooking, so I stopped by the rib place and picked up some nekkid ribs.  I got home, sat down at the table, and ate.  After a few minutes, I WAS BORED OF EATING!!  AND I STOPPED!!!

WTF???  Is this ME?!?!?!  In the past, I can remember hubster going out of town and I'd go for rib night, order a rack of ribs, mac and cheese, and 10 chicken wings...and eat all of it.  I could eat all that because no one saw me - closet eater much?

It is awesomely awesome to me that I ate until I was sated and then stopped.  This is big.  I hope this is a sign of the future.

Anyway, here are two progress photos that I took this morning.  Not the best angle or photos or anything, but there.  I'll put them on my progress page.  I guess it's because it's me, but it seems I look about the same. 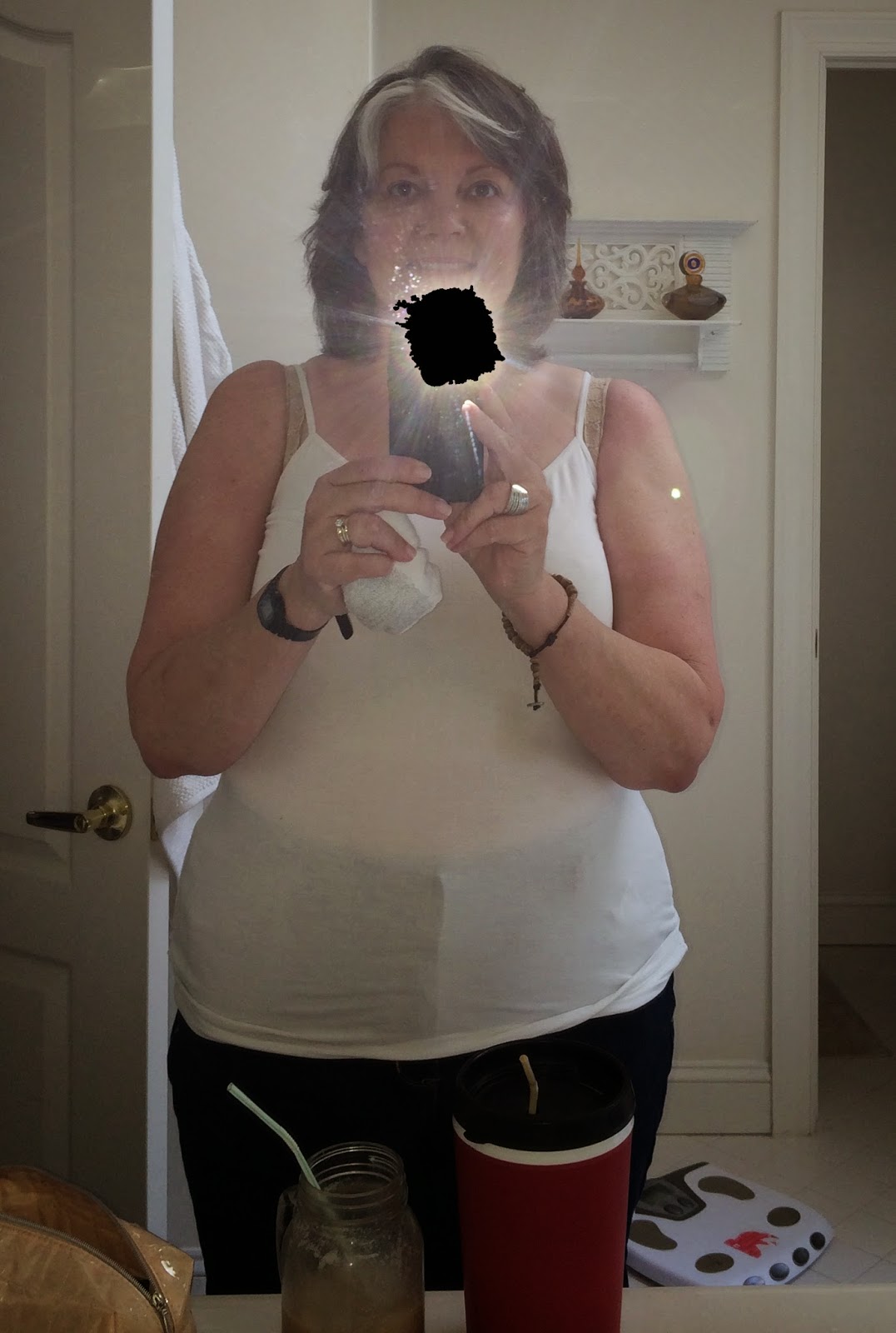 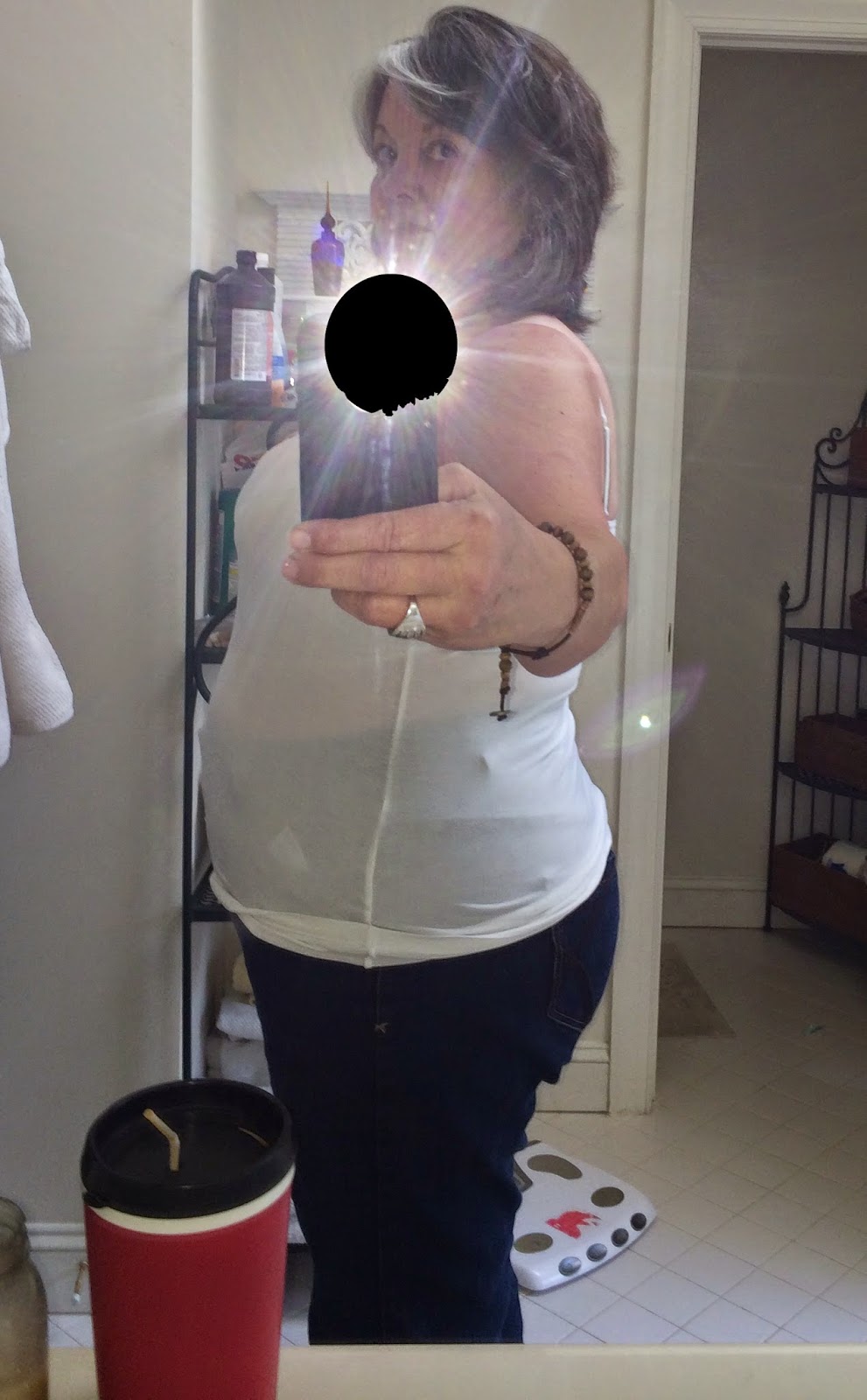 That's about it for today.

Onward!
Posted by LuckyMama at 9:47 PM