The last week has been a whirlwind with a lot of hard work and a lot of deep, hard thinking.  All those clothes I bought wore quite well.  We left on Tuesday evening for a site visit and returned home late Sunday.  It was intense.

It was interesting because we used to live in the area we visited, so it was nice to see the place after almost 30 years.  I'd forgotten how beautiful the high desert can be.

And there were a lot of challenges and I didn't always win - not by a long shot.  But there were some cool things too!

The first good thing was the plane ride.  Last year, I was on the verge of having to ask for a seat belt extender because it was a true struggle to buckle the seat belt.  I would pull my shirt over my belt so no one could see how much the belt was biting into my tummy.

Well...here's a pic of the belt on this trip! 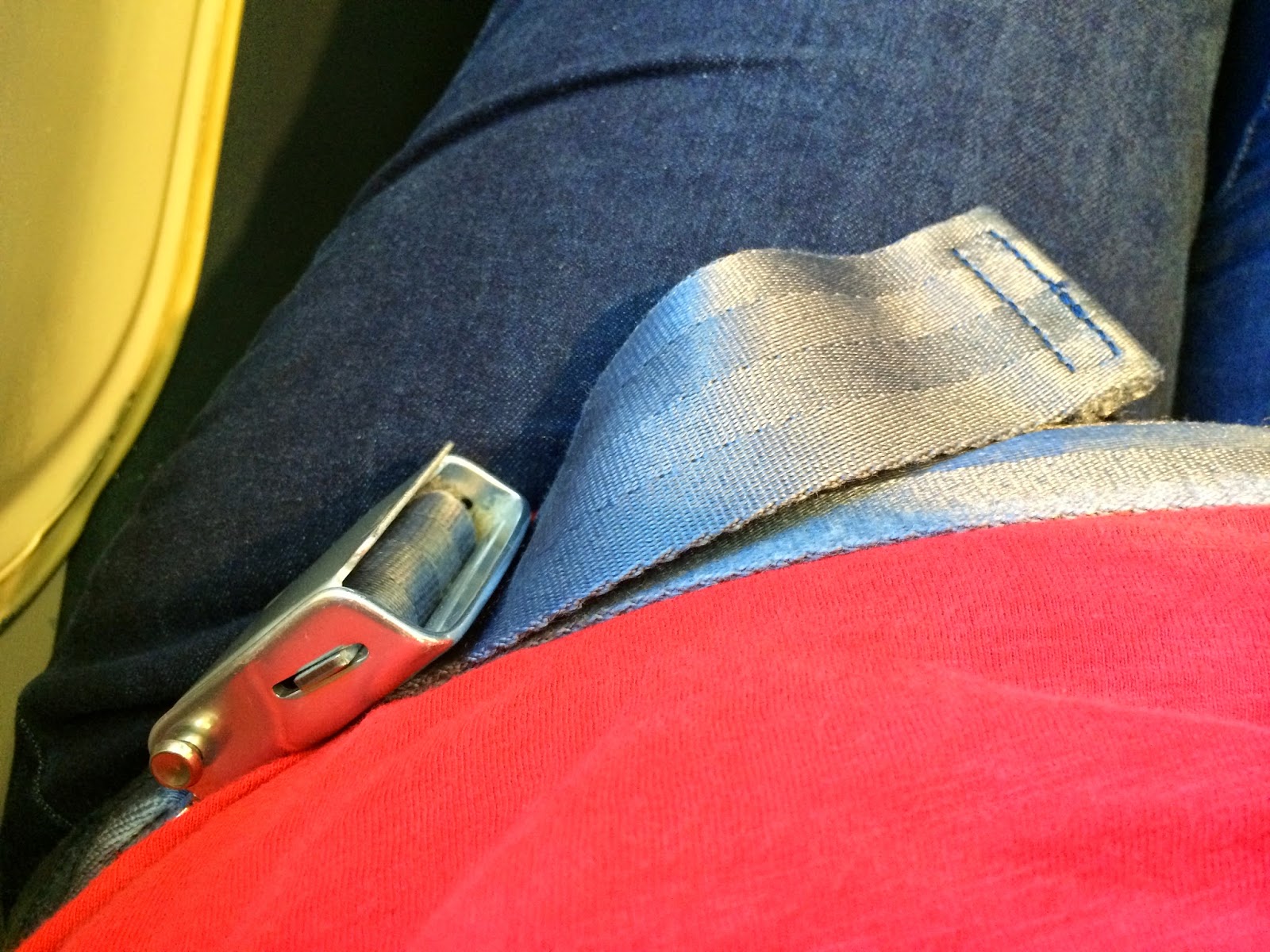 How awesome is that?!?!?!  Hubster saw me taking the pictures and just laughed at me.  When I told him what the deal was, he said he was proud of me.  I even had room in my seat and was able to put the tray all the way down without it resting on me!

We bought dinner in the airport to eat on the plane.  I got a good salad and ate it about halfway through the trip.  When we arrived at our destination, it was late and we were both starving.  It was a little strange because neither of us thought we should be hungry.  Anyway, the only thing open was Sonic, so I got some chicken nuggets and split with hubster.

When we got to the room however, the site we were visiting had the following in our room: 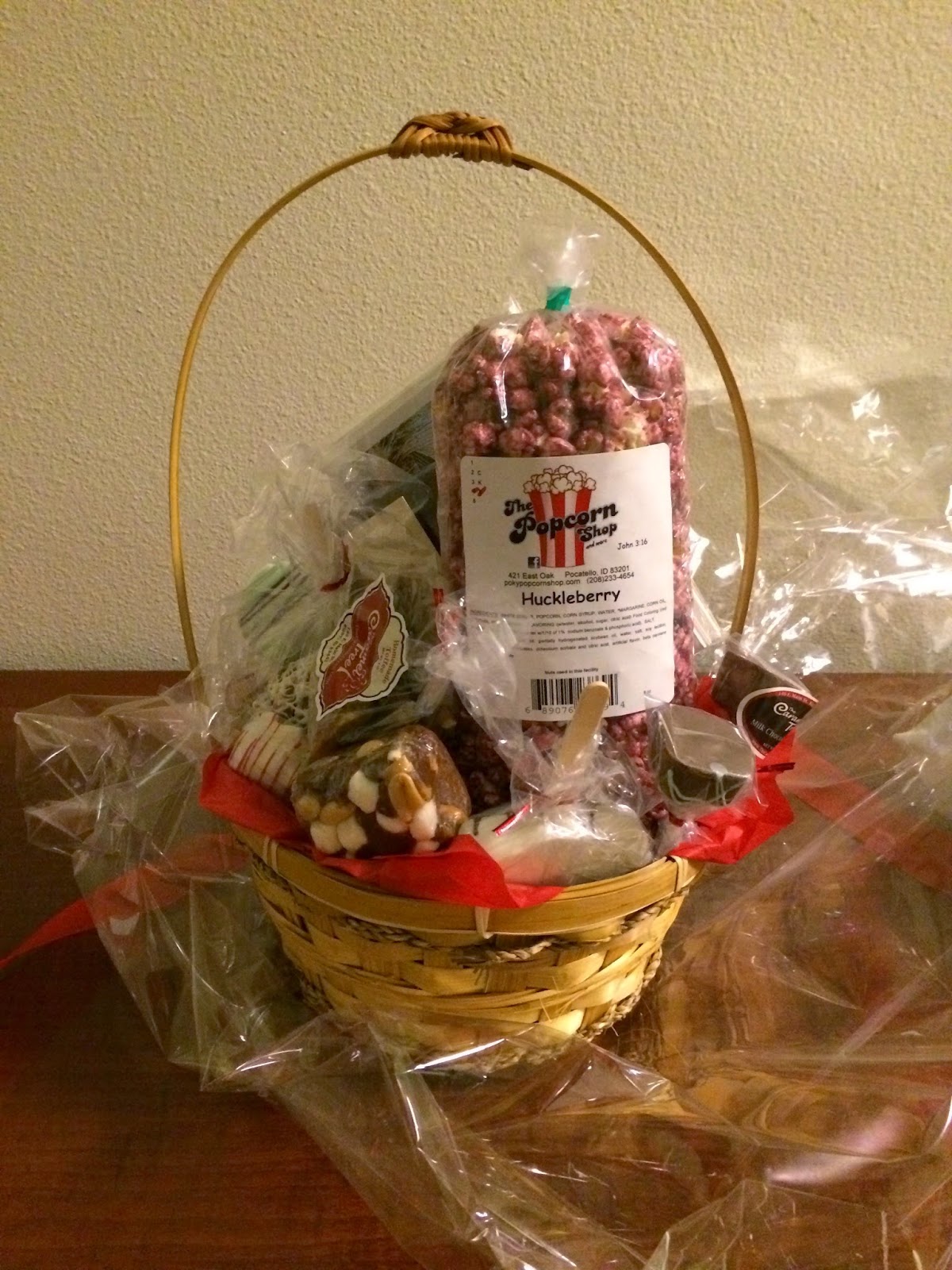 The picture doesn't do it justice.  There was a crap ton of chocolate in this basket with a note welcoming us back to the state!  That big thing is huckleberry popcorn, which hasn't been opened and is sitting on the bar.  It was an incredibly sweet gesture, but totally unexpected and exactly the thing I didn't need.  I decided to take two pieces and leave the rest alone.

I took a piece of the chocolate - some brownie thing - took a bite, and put it in the hotel refrigerator.  I had a bite of it every day we were there.  By the time we left on Sunday, I was down to the last bite.  It wasn't difficult to take the bite and put it back.

There was also a huge caramel apple.  I've got it in the refrigerator downstairs and have been cutting a piece each day.  It'll be done or rotten by Sunday.

As far as the rest of it goes, it's a bit interesting.  There was a ton of chocolate and I know what was in the basket.  I noticed that even though I wasn't going to eat it, I checked it to see what hubster had eaten.  What the hell is that about??

I'm not sure how I reconciled with myself so quickly to pick something and be done with it.  One thing that helped is that one bite really was enough.  It tasted good, but even one bite was intense and more than enough.

The only meals I had control over on the trip was breakfast.  The hotel had eggs and either canadian bacon or sausage each day.

The other meals I handled as well as I could, but by the end of the week I was tired of facing the challenges.  For instance, the first day in the cafeteria there was a salad bar with absolutely no protein, so I got the salad along with some lentil soup.  The other choice was sandwiches with tater tots.  The second day lunch was at a restaurant with another huge selection of sandwiches.  I got the soup and salad bar.  I have never in my life seen a salad bar like this one - the salads were pre-made with the dressing already on them.  Weird.  I selected the chopped chicken salad, but there was sugar in the dressing.

There was also the beer.  I don't drink often and never feel the need to drink because others are.  While it was a great visit, there was a LOT of stress so one night I had a few beers.  I guess it's because I've not had alcohol in a long time - and they were porters - I was hammered.  I talked with my mother and she was worried about me - I think she thought hubster was as inebriated as I was, but he wasn't.  I felt totally fine the next day, so I'm thinking it had to be my general lack of alcohol use and the fast onslaught of sugar from the beer.

On Saturday night, we had dinner at a colleague's house.  I had a small glass of red wine, but then stopped.  I was asked about more wine several times, but I just told everyone that I was the designated driver for hubster.  The dinner itself was fine, but an apple cake was served for dessert.  I didn't HAVE to eat it, I wasn't REQUIRED to eat it, but I picked a very small piece - perhaps a two inch square.

So how did I do on the trip?  I did okay - in the C+, B- range.  I basically maintained the status quo.  I don't know that I can explain it, but those initial thoughts after seeing that chocolate basket was a bit jarring.  I think I addressed them, but it shifted my course for the trip even though I didn't go all BSC on the chocolate.  Having to address the emotion while facing ongoing food choice challenges, and being away from my home turf complicated it all.

Did I do okay?  What do you think?  Am I being realistic or am I making excuses?

And I know now more than ever I have a lot more to learn and to address on this road of mine.