This pretty much sums up my attitude for the last few days: 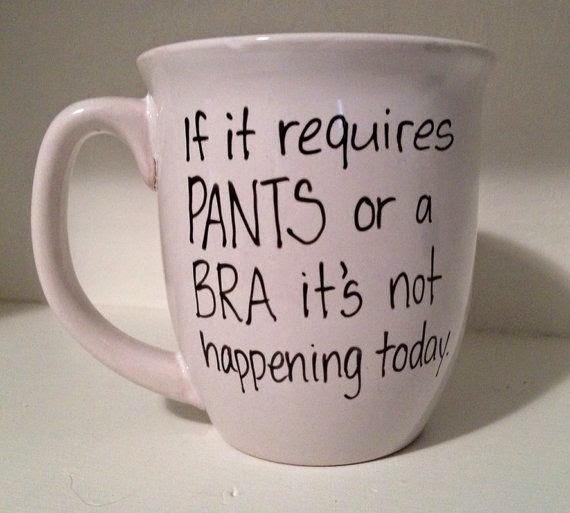 Hubster left for a trip on Saturday and with the hours we've been working lately, the quote pretty much represents my attitude with "this weekend" replacing "today".  I'm happy for the opportunity to do nuttin', nuffin, NOTHING!.  HA!  Mama, thanks for sending the pic to me!

However, if I want to eat, I think I'm gonna have to do something - like take a shower and get dressed.  Usually, before hubster leaves on a trip, I've got something for the crock pot ready to go - not this time.  So Costco - here I come.

Foodwise - I'm good.  Staying on track and towing the line.  One thing I've learned is that I think I'm gonna have to give up brussels sprouts and cabbage.  As time goes by, the tummy ache I get after eating them is getting worse.  It's awful.

Last time I wrote about the trip to Idaho and how I fared on the trip.  I appreciated every comment I received, particularly Susan's.  I've thought about what she wrote often since then and there are two things that I've learned and realized as a result.

First, she's totally right.  Having something like chocolate, particularly at this point can be a slippery slope and something I need to be careful about - quite careful.

The good news is that while I like chocolate, it doesn't make me crazy, so it wasn't difficult to have it in moderation and be done.  And even though there was a lot of chocolate, it's not a trigger for me.

The second thing is that I have to be careful and make sure I remain diligent.  I've been at this for 9 full months now and while I've done okay and made some changes, it seems I've become a little lax - not off the rails, but it could head that way if I'm not careful.  I'm not sure that the habits I've created are lifelong at this point.

I have to remain pro-active on my own behalf.  During the latter half of the week, I was being reactive and letting things happen instead of making things happen.  Now - that's fine to occur every once in a while, but I need to make sure it doesn't become a matter of course.  I'm not far enough along to know that a detour from my path won't lead to a total derailment.  I get more confident as time passes, but I'm not there yet.

So here I am...back at home for a week and things are good.  I'm on track and looking forward to the fall and getting into the 240s and then the 230s.  Still learning every day.

Onward!
Posted by LuckyMama at 4:56 PM