A day on point

The didn't start out differently than any other day, but it turned out that I had the best "on point" day in a long time.  There was no obsessing, I effortlessly made the right choices, and I just basically kept my ducks in a row.

Breakfast was a single scrambled egg with two slices of bacon and a piece of breakfast sausage.  Lunch was a salad - grilled chicken, a little blue cheese, lettuce, broccoli, cauliflower, cucumbers, and tomatoes.  It was such a pretty salad that I took a picture of it. 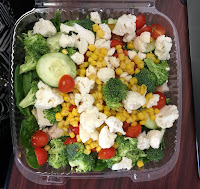 I didn't get to eat said salad until almost 2 pm and I was actually hungry.  I added some dressing, but I'm not a slobbery dressing person - I like it to accent, not drown the salad.

I shared my strawberries during a mid-afternoon meeting, but kept those dutch cocoa sunflower seed bite thingies - Somersaults - to myself!

I had a meeting that ran late, so I didn't leave until after 6 and got home close to 7.   This would normally mess up my day, but hubster made dinner - steaks and asparagus.  I was glad of it too!

I bought a Takeya Flash Tea thingie at Sam's last night.  I'd seen them before, but thought they were too expensive for my tastes, so when I saw it for less than $20, I bought it.  It's gonna make it much easier at work to have tea instead of soda.  I like soda, but I don't feel bad if I don't have it.  The cafeteria doesn't have tea and I don't always takes the time to pour a thermos of tea.  Water doesn't quite cut it for me.  Unsweetened tea is a much better option for me, so this is a good route.  I'm sure I could have gotten a regular old container and done the same thing, but that's not quite the point.

Overall, it was a pretty good day.  I'll take it!