It has been a perfect week, but it was an acceptable week.  I'm getting back on track and developing some discipline and awareness.  The scale is down over the week.  I'll start posting my weight again soon.  It's still higher than my original starting weight, but headed in the right direction.

Hubster was out of town for most of the week on a trip I had forgotten about.  Actually, I'm thinking he forgot to tell me!  Anyway, the first night was rough and was fast food.  Normally, I'll do something in the crock pot and just eat it all week, but we had just returned from Memphis and I was unprepared.  However, for the rest of the nights I ate unbreaded chicken wings - I'm the most boring eater.  Good decisions at lunches - salad bar each day and the cafeteria guy will give me a chicken breast off-menu, so that was good to know.


Last night was a steakhouse - I ate half and had the other half for dinner tonight.  Lunch today was in a town south of here with some friends.  I had a chicken panini and tea.  The serving was quite reasonable, so I think it was okay.  Afterwards, we walked around an art show and I bought these two pieces.

I dunno what it is that I like about either of them except I do - one is red and the other is different....and both of them "talk" to me.

We also picked up two kittens from a co-worker while we were in Pokie today.  We have a vole problem and while it's cute that hubster looks like Carl from Caddyshack as he walks the property, it's too much for him particularly when we have grain fields in front and behind our house.  These kittens are adorable!!  The kids are saying they are gonna be indoor cats in no time, but they will have to remain outdoor cats. 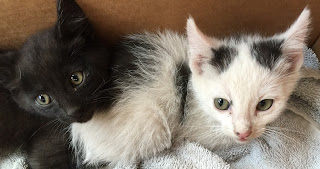 In thinking about this past week, dinner last night stands out.  I ordered a 16 oz steak with salad and sweet potato - actually it was a yam - none of that caramel stuff and marshmellow stuff though.  I couldn't eat more than half of it.  There have been times in the past where I felt almost obligated to eat the entire thing - clean plate and all that bullshit.  And while I ate a little past full before I realized it, I'm glad I stopped.  I didn't feel deprived or negative.  I can remember a panicky-type feeling in the past - like if I didn't eat it all, I may never get it again.  Intellectually, I know it's silly, but sometimes - oftentimes - the emotion overcame the reasoning.  I'm glad it didn't last night.  I had a good feeling about it last night and again when we ate the leftovers tonight.

The coming week should be good.  I can't see anything on the horizon that is going to be difficult - I hope it stays that way.  I'm going to work to maintain an even keel regarding food.