A new low and a new high

I had a new low and a new high today!

The scale showed a new low this morning and I was determined that I wasn't going to screw it up.  I was acutely aware of the "free eating time" I wrote about last time.  In this case, it was hubster's return and the new low on the scale - free eating time would have been a reward don'tcha know!

So, it's been a mad house at my house this past week.  I decided that I would surprise hubster and have his office totally remodeled while he was out of the country - right in the middle of the bathroom/laundry room remodel - 11 days that including weekends.  It's an awkward room with six walls and two doors - one of which was removed.

Hubster got home yesterday and we were working on the room right until I picked him up from the airport.  These are the before and after pics - I think we did a good job! 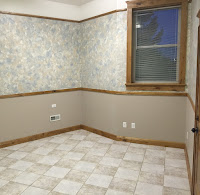 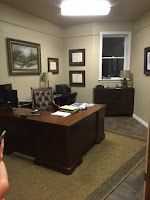 In any event, I had put a roast in the crockpot, so after I picked him up from the airport we came home and ate.  INSTEAD OF GOING OUT!

Then tonight, we had to go to the laundromat to wash clothes since he had barely any clean clothes and we're leaving for his parents' house tomorrow until Monday.  However, we were late getting to the laundromat because we had to talk with the contractor about some of the remodel and what we were going to do with gas lines, etc.  Important stuff!

I realized that was bullshit, but I didn't say anything to him.

We went to a Mexican drive-thru that we both like.  After hubster ordered, he asked me what I wanted.  I told him that I just wanted a Diet Coke.  He didn't say anything about that and just ordered the Diet Coke.  I gotta say - I was thankful when we drove away from the order speaker.  I will also say that I felt a bit uneasy - like I was neglecting myself or not giving myself something I wanted.  I was a little sad too.  But I stuck with it.

When we got home I heated up the leftover roast and sat right down with hubster at the table.  We ate our respective dinners and talked the whole time.  At the end, my roast tasted really good and it really wasn't a big deal that I didn't eat the Mexican stuff.  Gotta say - I felt a little proud of myself.  It's also a really good reminder that I REALLY CAN DO THIS!

I'm hoping that this little victory will help shore me up to keep my shit together in Memphis this weekend.  It's always stressful when hubster's family gets together - they are a contentious bunch of folks and we just don't live our life like that.  I wish they could see how it is when my family gets together at Thanksgiving - we have a really good time and there is rarely, if ever, an argument.  We are thankful we're together, which is the way it should be.  But it's my mother-in-law's 80th birthday and it will be the first time in over 20 years that ALL her children and grandchildren have been together at the same time at their house.  The current pre-visit drama is that hubster's sister wants to make lasagna.  However, her lasagna is not good and she makes a total disaster of the kitchen and then expects everyone else to clean up her mess because she cooked.  The other 3 siblings want to order out and eat from disposable dishes, which sounds awesome to me.

If I'm not gonna eat the Mexican drive-thru I like, you can bet your booty that I'm not going to eat shitty lasagna!  We are staying at a hotel with a made-to-order breakfast, so I know I can get a good meal there - meaning no sugar and minimal carbs for me.  I'll take extra to the room and eat when we return at night if I need.

Wish me luck with the in-laws!