An active week and a 5K

...finishing up an active week.

My daughter came home for vacation and while I'd planned to take the entire week off, I had to work Monday and Tuesday.  It's always so good to have her home.

Monday evening was my session with the trainer, Mr. Evil, at my house.  I thought about calling him to cancel since my daughter was home and I wanted to spend time with her.  I quickly realized, however, that it was an excuse - and not a valid one.  So I kept the appointment with him.  Score for me.

Recognizing those excuses for getting out of exercising or eating things that aren't good for me are keeping me on my toes lately.  So far, I'm keeping a handle on it and may even be a little ahead of the game.

Wednesday evening we went out to a local event - basically beer-drinking.  I abstained from all alcohol and drank Diet Coke and water all evening.  Good thing - hubster and my daughter were hammered!  Someone had to be the DD.  Another score for me.

On Thursday, we drove to the southwest corner of Yellowstone and walked along the Falls and Bechler rivers.   Hubster and my daughter wanted to walk the Bechler River Trail from Cave Falls to the ford.   I was looking for reasons not to do it - to let my husband and daughter go while I stayed in the truck.  However, in the end, that behavior is not going to get me where I want to be. So I went.  It was mostly flat with a few elevated areas and rocks/wood blocking the path.  The river (Falls and Bechler) were beautiful as were both Bechler and Cave Falls..  Another score for me.  Here's a few photos. 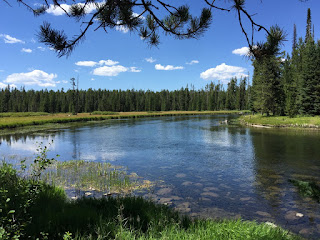 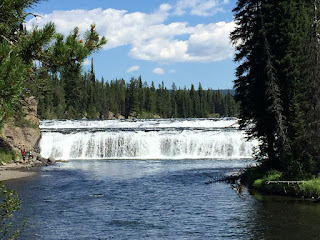 On Thursday, we again went to get ice cream.  My daughter had seen an article about the best ice cream in each state.  Of course, the best ice cream in Idaho would be right down the road from our house!  The first time we went, I got a kiddie cone.  The second time we went, I didn't get any because first I didn't really care for it - maybe I like shitty ice cream - and secondly, it's not anything special and I can make the decision to get it if I really want it.  So no ice cream the second time.  Score another for me!


Friday morning had me working with the trainer at his gym.  He totally kicked my ass, but it was a workout that made me feel really strong.  I'm starting to prefer doing some of the lower body machine work over free weights and squats - I feel stronger and more successful with the machines.  Yet another score for me.

Our daughter left Friday night, so we were sad to see her go.  However, I was starting to get a little nervous about Saturday because...

I had committed to a 5k.

I went to bed early Friday night because I knew I needed to get up early - my friend was picking me up at 6:30 am.  I didn't sleep very well and when I woke up at 4:30, all I could think about was what excuse could I make to get out of it.  There were all kinds of excuses going through my mind - I was tired, it might make my back hurt, I was sore from the workout, it was going to be hot.  In the end, I was just being lazy for not wanting to do it - it's easier to not do it.

Again, that thinking isn't going to get me where I want to be, so I got my ass up and got ready.

And yannow what?  I did it.  Hell, I knew I could do it.  Granted we walked it, but we still did it - started it AND finished it! 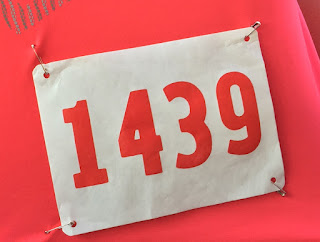 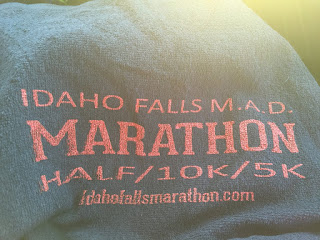 I don't know why the hell I did it, but I committed to either running the 5K or else walking the half marathon next year.  The thing about it is that my friend won't let me forget and will hold me to it.

It's been easy to make good food choices this week - I don't know why I'm in control, but I'll take it.

My back is doing better but still giving me twinges.  I was really worried for a while there, but I'm taking care of it!

Onward!
Posted by LuckyMama at 9:05 PM