There's been an awful lot of stress since that last post; however, I feel I managed it well.

Our kids came home and we skedaddled over to the Elk Refuge in Jackson near the Grand Tetons - we got some incredible shots.  In all, I think we saw about 7000 head.  It was a fun time and we had an awesome family weekend. 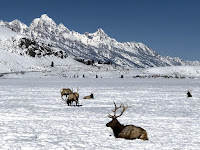 One thing about family time is that I've gotten used to not having the kids around so I was a bit concerned that some of the good habits I've adopted would be challenged.  Didn't happen.  They all drank alcohol - I didn't.  They wanted crazy foods, I didn't partake, but got my own instead.  Interesting though at the end of the weekend, the scale was up a bit.  However, I think it was because we were eating out, and though I ate well, there were some processed foods.

Stress at work was EXPLOSIVE for me this week and even interrupted my vacation last week.  For the past several years, I've carried two job titles; however, I abruptly resigned from one this week because I'm just tired of the bias and bullshit.  It's not loss in pay; just less bullshit.  I made a pact with myself at the beginning of the year that I was going to actively deal with stress this year because I think that is part of my weight issue.  So - I'm actually glad to be done with it.

Also had my doctor's appointment on Thursday.  It was a great appointment.  I really like this doctor a bunch - I wish everyone could have a doctor like him because he partners with you.  In any event, I'm down 15 lbs EXACTLY since January 17.  He's was initially concerned that's too much, but once we started looking at it, it's averaging two pounds a week - we're both good with that.  I think much of the success goes to my actively working on sleep and the WEEKLY fasting.  My nightly sleep average has almost doubled over the last three months.

The doctor likes my fasting approach.  He's pretty adamant about no longer than 72 hours.  Fortunately, I agree with him.  In the back of this brain of mine, I'm starting to formulate some real opinions about what is going to be best for me about getting this weight off for good relative to nutrition.  OH!  This reminds me of one of our conversations.  I told him that my thought process had switched from thinking in terms of calories to thinking in terms of energy requirements.  He was so funny - it was like a light went off.  That led to the conversation about optimum nutrition.  We tend to agree on the profile - lower protein, higher fats (but quality fats), high fiber carbs, and no added sugar.  While we didn't discuss it, for me I will add, no added sugar and minimal grain.

The best thing about the doctor's visit was the bloodwork - it's all good.  Last year, I was feeling desperate and a friend of mine referred me to a functional medicine doctor who was basically a quack - UV blood irradiation, vaginal ozone, and all that shit.  In any event, he did a crap ton of blood work, sent it to a lab in California, don't know why they couldn't send it to a lab closer to home, and the results came back with all sorts of horrible results.  Basically, my testosterone was through the roof, I had Stage 2 kidney disease, and signs of a myriad of autoimmune diseases.  When I brought those results to my *real* doctor, he didn't believe the results.  The first thing he said yesterday when he handed me the results was, "Notice anything?"  Well yeah.  The testosterone dropped from 402 to 25.  All of my kidney function is fine (I only have one kidney due to previous kidney cancer.) . We measured my A1C for the first time ever - no evidence of diabetes.  We think that the results got mixed up with another patient or else it wasn't a reputable lab.

I have another doctor's appointment on 4/11.  He and I have agreed on 6-week checkups while I'm doing these fasts to ensure things continue to go well.  I also want to maintain some accountability.

One thing to mention that might be useful for the passersby.  I've found a wonderful app called Happy Scale.  You can log your weight or it will pull your weight in from other the Health app if you have an iPhone.  It will breakup your total weight loss goal into 10 smaller goals, give you an estimated timeframe based on how quickly YOU say you want to lose, tell you how quickly you're going to get there based on how quickly you're actually losing, gives you weekly, monthly, and yearly weight loss charts, running averages, etc.  For me, it's the best visual I've ever come across.  I used to maintain something similar myself.  It sounds a little silly perhaps, but it's a bit motivating to me.  And no, they have no idea who I am - it's just a useful app for me.

Hubster has been on travel all week and gets home today - I'll be happy to see him.