Still plugging away...Hubster and I just celebrated our 35th anniversary!

It's hard to believe we've been married that long.  I look at him and still see the same man I married...and then I look at the pictures.  Funny thing, I asked him if I still looked the same to him; he said I did.  I've hidden all the pictures now.  Just in case...lol

Anywho - we're so busy all the time we decided to stay close to home and go fly fishing.  We stayed at a really nice lodge with all the amenities and a guide (who did all the rowing!)  It was tons of fun. 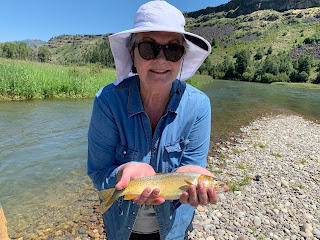 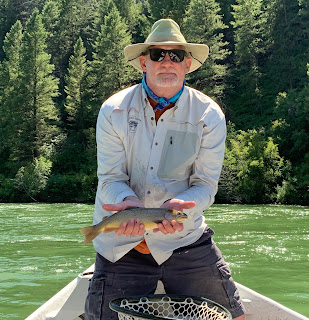 Healthwise, things are going well.  During our little getaway, I splurged a bit.  However, I didn't go off the rails either - it was pretty much moderation all the way.  One interesting thing was that this was an inclusive package we had, so all our meals were included - even lunches on the river were packed for us though I had no clue ahead of time what they were going to be.  One day it was ahi tuna on a bed of salad; the next day, it was a huge turkey (real turkey sandwich).  There was fruit, some other salad type of thing, a few pieces of candy, some sort of fruit bar, and a bag of chips.  Each day, I ate the main thing, the salad thing, and the tiny candy thing (the splurge!) - and that was it - no chips, no fruit bar, no other junk.  I can honestly say there was no desire.  I was pretty happy about that too.

When we got back and I weighed the morning, the scale was up three pounds, but it was the alcohol, the increased carbs since I did have dessert three nights in a row, and that damned Diet Coke.  I think one thing that made the difference is that it was really quality food in realistic serving sizes.  For instance, one dessert was a chocolate tart/torte and was no more an inch at its widest part.  The ice cream scoop was the size of a golf ball.  It was good, I was full and satisfied.  There was also very little...read NO...snacking between meals for me.  We were too busy fishing.

But today, I'm back on track and I'm good.  No residual issues or hankerings.  I'm thinking there really is something to this feast/fast thing.

Anyway, I don't post often, but wish I did.  I'm sticking with it!